What You Need to Know About a Wheezing Cough 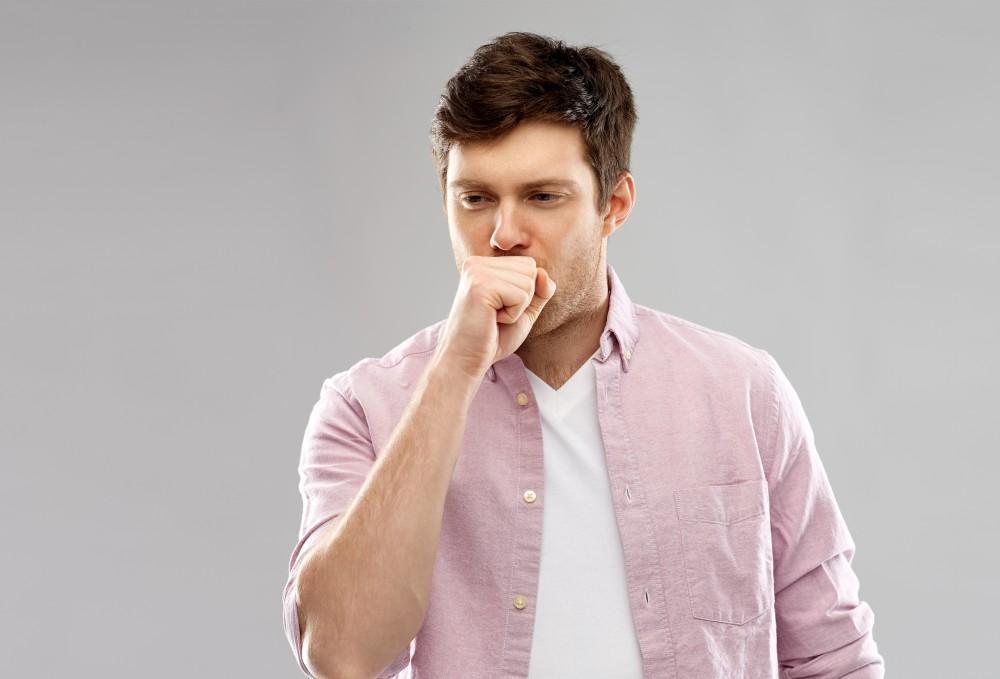 Even though a wheezing cough can affect people of all ages, it can be particularly alarming when it happens to an infant. That’s why it’s important to learn the causes, symptoms, and treatments for a wheezing cough in both adults and babies.

What are the causes of a wheezing cough in adults?

A wheezing cough in adults can be caused by a wide range of ailments. According to the American College of Allergy, Asthma, and Immunology, some of the more common causes include the following conditions.

Viral or bacterial infections like bronchitis that produce an ongoing cough with mucus, shortness of breath, chest pain, or a low fever can lead to a wheezing cough. Also, the common cold, which is a viral infection, can cause wheezing if it settles in the chest.

Pneumonia, which can be caused by bacteria, viruses, or fungi, causes inflammation in the air sacs in your lungs. This makes it difficult to breathe, and symptoms can include a wheezing or phlegmy cough, along with fever, sweating or chills, chest pain, and fatigue.

Asthma symptoms can cause the lining of your airways to swell and narrow, and the muscles in your airways to tighten. The airways then get filled with mucus, which makes it even harder for air to get into your lungs.

These conditions can bring on an asthma flare-up or attack. Symptoms include:

Chronic obstructive pulmonary disease, often referred to as COPD, is an umbrella term for several progressive lung diseases. The most common are emphysema and chronic bronchitis. Many people with COPD have both conditions.

GERD affects about 20 percent of people in the United States. Symptoms include heartburn, chest pain, wheezing, and shortness of breath. If not treated, the irritation from these symptoms can lead to a chronic cough.

While rare, some people may experience anaphylaxis, which is a serious, life threatening medical emergency that requires immediate attention. Reactions occur almost immediately after being exposed to an allergen with symptoms that include:

If you think you’re having an anaphylactic reaction, call 911 immediately.

Some types of heart disease can cause fluid to build up in the lungs. This, in turn, may lead to persistent coughing and wheezing with white or pink, blood-tinged mucus.

What are the causes of a wheezing cough in babies?

As with adults, there are a wide range of ailments and conditions that can cause a baby to have a wheezing cough.

Some of the more common causes of a wheezing cough in babies include the following conditions.

RSV is a very common virus that can affect people of all ages. It’s more common in children and infants. In fact, according to the Centers for Disease Control and Prevention (CDC)Trusted Source, most children will get RSV before they are 2 years old.

In most instances, infants will experience mild cold-like symptoms, including a wheezing cough. But some cases may worsen and cause more severe illnesses like bronchiolitis or pneumonia.

Premature babies, as well as babies with weakened immune systems or heart or lung conditions, are at a higher risk of developing complications.

Bronchiolitis, which is a common lung infection in young infants, can happen when the bronchioles (small air passages in the lungs) are inflamed or full of mucus, making it difficult for a baby to breathe.

When this occurs, your infant may experience a wheezing cough. Most cases of bronchiolitis are caused by RSV.

A wheezing cough can happen when infants have a viral infection such as a cold or croup.

A stuffed or runny nose may be your first clue that your baby has caught a cold. Their nasal discharge may be clear at first and then become thicker and yellowish green after a few days. Other symptoms besides coughing and a stuffy nose include:

Croup can be caused by several types of viruses. Many come from the common cold or RSV. The symptoms of croup are similar to those for a cold, but also include a barking cough and hoarseness.

Whooping cough, also called pertussis, is a respiratory infection caused by a type of bacteria. Although it can affect people of all ages, it can be especially serious for infants and young children.

At first, the symptoms are similar to those of a cold and include a runny nose, fever, and cough. Within a couple of weeks, a dry, persistent cough may develop that makes breathing very difficult.

Although children often make a “whoop” sound when they try to take a breath after coughing, this sound is less common in infants.

Other symptoms of whooping cough in children and babies include:

Allergies to dust mites, cigarette smoke, pet dander, pollen, insect stings, mold, or foods such as milk and milk products can cause a baby to have a wheezing cough.

While rare, some babies may experience anaphylaxis, which is a serious, life threatening medical emergency that requires immediate attention.

Reactions occur almost immediately after being exposed to an allergen and are similar to the symptoms for an adult, such as:

If you think your baby is having an anaphylactic reaction, call 911 immediately.

While most doctors like to wait to diagnose asthma until a baby is a year old, an infant can experience asthma-like symptoms such as a wheezing cough.

Sometimes, a doctor may prescribe asthma medication before the baby is a year old to see if the symptoms respond to the asthma treatment.

If a young child or baby starts to cough suddenly, with or without wheezing, and doesn’t have a cold or any other type of illness, immediately check to make sure they aren’t choking. Small objects can easily get stuck in a child’s throat, which can cause them to cough or wheeze.

When to get immediate care

It’s critically important that you seek immediate medical care if you, your child, or baby has a wheezing cough and:

If your baby is unwell and has a wheezing cough, make sure you follow up with their pediatrician. Because infants can’t verbalize their symptoms and how they’re feeling, it’s always best for your baby to be examined by a pediatrician to get a diagnosis and the right treatment.

Home remedies for a wheezing cough

There are several home remedies you can try to help manage the symptoms of a wheezing cough if it’s not too severe.

But before you proceed, make sure your doctor has given you the thumbs up to treat your wheezing cough at home. These home remedies aren’t meant to replace medical treatment, but they may be helpful to use with medications or treatments your doctor has prescribed.

When you inhale moist air or steam, you may notice that it’s easier to breathe. This may also help reduce the severity of your cough.

There are several ways to use steam for a wheezing cough. You can:

A humidifier works by releasing steam or water vapor into the air to increase humidity. Breathing air that’s got more moisture in it can help loosen mucus and relieve congestion.

Using a humidifier is appropriate for both adults and babies. Consider running a small humidifier at night while you or your child are sleeping.

Hot tea, warm water with a teaspoon of honey, or other warm liquids can help loosen mucus and relax the airway. Hot tea isn’t appropriate for infants.

For adults with bronchial asthma, deep breathing exercises, similar to those done in yoga, may be especially helpful.

A 2009 studyTrusted Source found that people with bronchial asthma, who did breathing exercises for 20 minutes twice daily for 12 weeks, had fewer symptoms and better lung function than those who didn’t do the breathing exercises.

If you know that your wheezing cough is brought on by an allergic reaction to something in the environment, take steps to reduce or avoid contact with whatever may trigger your allergy.

You may also want to avoid cigarette smoke since it can make a wheezing cough worse.

A wheezing cough is often a symptom of a mild illness or manageable medical condition. However, it’s important to pay attention to the severity, duration, and other symptoms that accompany the cough, especially with babies and young children.

If you or your child or infant has a wheezing cough accompanied by breathing that’s rapid, irregular or labored, a high fever, bluish skin, or chest tightness, be sure to get immediate medical care.

Also seek immediate attention if you think the wheezing cough may be due to anaphylaxis, which is a serious, life threatening condition. In this situation, reactions occur very quickly after being exposed to an allergen.

Besides wheezing or coughing, other symptoms include trouble breathing, a rash or hives, a swollen tongue or throat, chest tightness, nausea, or vomiting.